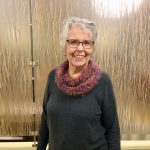 “Use it or lose it,” is Eleanor Gordon’s response when asked why she regularly attends the Brain Boosters class, now in its fourth year at Someren Glen (a Lifeplan Community). “Dementia runs rampant in my family tree,” she told the Mosaic. “I started to notice slight memory impairment in myself and joined the class.” Since then, she believes her memory has gotten better. “I know my memory has certainly not gotten any worse!” (Her doctor has confirmed that.)

Research continually demonstrates that brain training pursuits can help prevent the progression of dementia and support improved executive functioning in our brains (e.g. memory, decision-making, attention and inhibition). There is also further evidence that social connection is linked to a reduced likelihood of developing dementia. 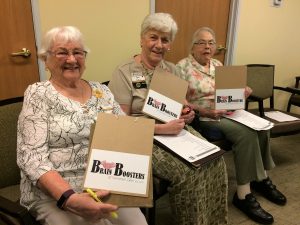 Brain Boosters is a weekly class that includes a variety of brain challenges, including Dr. Rob Winningham’s Theory of Mind, Word Generation, Social and Spatial exercises, along with many others. Participants even get homework (Yes, homework!) which may involve reading an article related to brain health and completing an exercise such as a Sudoku puzzle or anagram. “We have one exercise that we do in class called Ten Things on a Tray,” Eleanor shared. “We are shown the tray at the beginning of class and have to see how many items we remember were on that tray at the end of class. I used to be so proud when I could get four or five. Now, I average eight or nine and sometimes even ten.”

Eleanor is a Brain Boosters cheerleader, and is always inviting new residents to class. “It’s not just about exercising our brains,” she says. “It’s about fellowship and fun … we have so much fun in class.”